We said goodbye to Rafaela in the beginning of February. Therefore we, Lea and Rupert, remain the only two volunteers for the moment. School days are long and yet we always find time to have a lot of fun with the kids. One Sunday afternoon for example we used paint that Lea brought here to paint pictures and do some fingerprints decorated an entire wall with our art.

During the week we still helped out in Fridah’s preschool kindergarten class (PP2) and continued our small group projects (e.g. working with sand to improve their general development) which had become an important part of their day over the past 3 months (see report by Rafaela & Rupert). We also helped on the farm on a regular basis and helped Farmer Kimeu harvested corn, skuma, mangoes and grass for the cow and her newborn calf. On weekends the children came along to do their part and have fun. 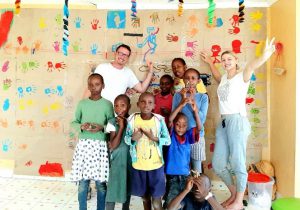 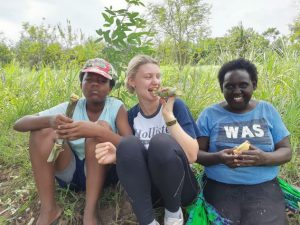 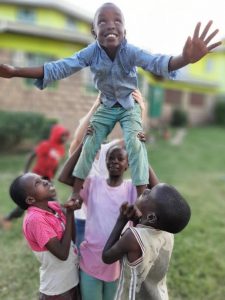 Lea introduced the children to the world of acrobatics. We started with body awareness exercises, trust games and stretching exercises – it didn’t take long before the kids created their own little acrobatic pyramids. Our training sessions became very popular and we decided to offer special acrobatic lessons to those who wanted. The kids practiced to the point where acrobatic formations became strong, more stable and definitely larger. The children’s ambition and their discipline made it all worthwhile. We also continued to offer flute lessons regularly as well. It is the perfect touch to spending free time with a lot of music, acrobatics and creativity.

Mid-February the children finally had a week off. Next to a lot of fun we all used the time to prepare for the annual medical camp that was just around the corner. We prepared by cleaning a lot and planting new greens. One day during the break we cooked “cheese spaetzle”, a traditional Bavarian food, together. It was a welcome change.

The absolute highlight of the week was a trip to the swimming pool in Nguluni. Since we had to walk there and some of the children were sick, unfortunately not everyone could was able to enjoy the swimming. Nevertheless we spent half a day there and enjoyed teaching the children how to swim. 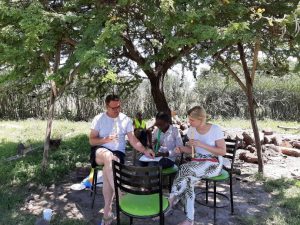 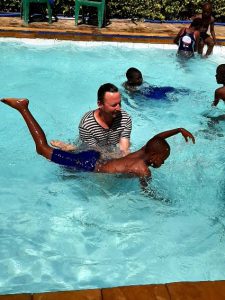 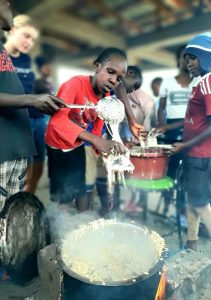 At the end of February, nine new children moved to the MCC. It was admirable to see how easy the new children were welcomed and accepted and how fast they became part of everyday life. They clearly felt comfortable within their new community and opened up to us as well. The five boys (Moses, Kennedy, Boniface, Philip, Cosmas) and the four girls (Moarine, Faith, Elisabeth, Ann) are all between 4 and 10 years old.

The focus of the following two weeks was on the medical camp. This year the camp was held again on the MCC site and Dagmar Nuber (member of the association), Nora Mores (gynecologist), Dirk Wackernagel (pediatrician), Johannes Leidinger (gynecologist) and Amalie (intern) visited to share their knowledge. On Friday, February 28th, the medical camp began and both local and German doctors met at the Nguluni Health Center to discuss ultrasound and paediatrics. The next two days, three German doctors visited pregnant women and young mothers in the area to assist them with their needs. Sunday evening, we had a barbeque and mingled around the campfire to eat sausages and to sing until late into the night. 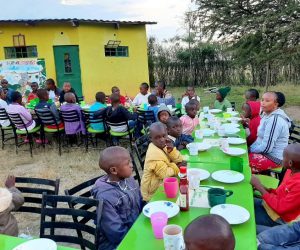 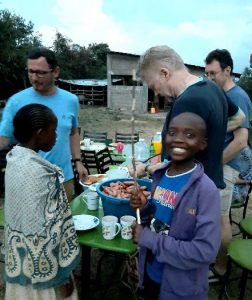 The actual medical camp started on Monday and was held on the MCC site. The doctors offered their service in various specialist fields such as ultrasound (prenatal care), cancer screening, HIV, tuberculosis, diabetes diagnostics, tooth and eye treatment and pediatric examinations. We helped with the assembly and disassembly and with the organization. Whenever we could we supported the German doctors with their treatments. During this year’s medical camp, more than 500 patients were examined and treated, which shows how important the medical camp is and how much it is appreciated. It was astonishing to see how easy it was for the kids and teenagers to openly talk about sexuality, pregnancy and sexual transmitted diseases. 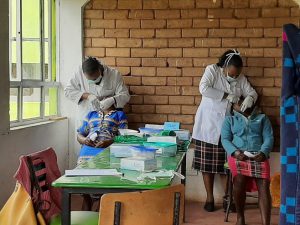 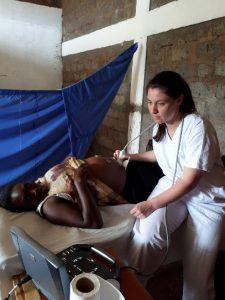 During Rupert’s last weeks we switched from the PP2 kindergarten to the PP1 group and we therefore worked much younger children (2-4 year olds) than before. The teacher’ name is Abigale. And with her approval, we tried to bring new ideas to the pedagogical everyday life as well.

Before Rupert’s last day we scheduled a meeting with Fridah and Abigale to exchange feedback and to say thank you and goodbye. Our time together has come to an end. Rupert’s farewell party will be very heart-warming as the kids have already rehearsed songs and prepared small gifts.

We would like to thank the association “Hand in Hand für Kenya”, which organized our stay at MCC and supported us with kind words and encouraging ideas during the process. We are especially grateful to the MCC community who welcomed us with open arms and hosted us with never ending care and warm-hearted gestures.